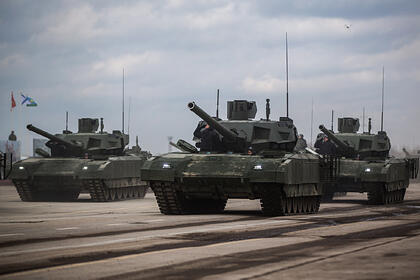 The T-14 tank on the heavy tracked vehicle platform has been tested in Syria, Russian Minister of Industry and Trade Denis Manturov said on Sunday.

"Yes, that’s right. They Armata tanks were used in Syria," he said in an interview with the Deistvuyushchiye Litsa (Political Actors) with Nailya Asker-zade program on the Rossiya-1 television channel answering a corresponding question. "They were used in field conditions, in Syria, so, we took into account all the nuances."

Alexander Potapov, CEO of Uravagonzavod, the tank’s developer and manufacturer (incorporated into Rostec corporation), said in an interview with the Vedomosti daily on February 3 that first batches of Aramata tanks would be supplied to the Russian army in 2020 for field trials.