Fire at hotel in SW Georgia takes away 11 human lives 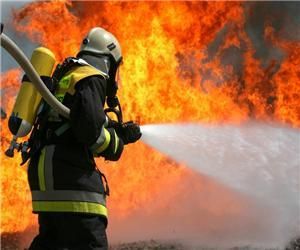 A fire that broke out on Friday night at hotel Leogrand in the Black Sea city of Batumi, the Georgian Interior Ministry said on Saturday.

Axar.az informs citing TASS that, the report said that identification of the dead was underway.

Somewhat earlier, the ministry put the number of the dead at twelve.

Participants in Miss Georgia 2017 beauty pageant made up most of the customers staying at the hotel at the time of the accident. The final of the pageant is to take place at the Batumi Center of Music on Sunday.

The ministry said the rescuers and hotel staff had managed to evacuate more than a hundred people from the building, including both customers and hotel employees.

Spokespeople for the directorate of the beauty pageant said that all the twenty contestants were having dinner at the hotel at the time the blaze broke out.

"All of them were evacuated to with the aid of a fire escape ladder and taken to safe place," an executive at the directorate said. "They feel well."

As many as 21 persons suffered from the fire and were taken to local hospitals. There are one Israeli citizen, five Turkish citizens and twelve Georgians.

As many as three people were discharged from hospitals after getting primary medical aid while the other eighteen injured were placed on courses of treatment.

Overnight to Saturday, Georgian Prime Minister Georgy Kvirikashvili arrived in Baku from Brussels after completion of the EU’s Eastern Partnership program summit. He was supposed to return to the capital Tbilisi but changed the plans after learning about the fire.

Kvirikashvili was familiarized with the situation and held meetings with regional officials.