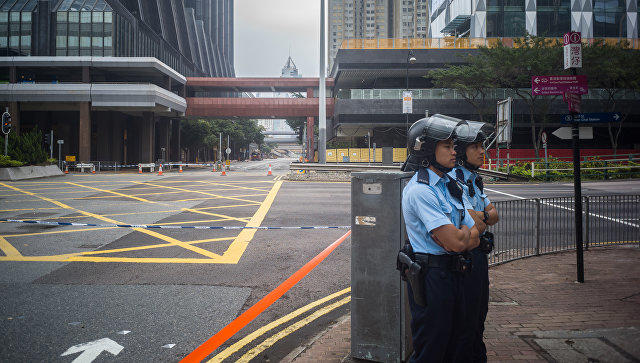 Hong Kong police fired tear gas and water cannon on Saturday and pro-democracy protesters threw petrol bombs in the latest in a series of chaotic clashes that have plunged the Chinese-ruled city into its worst political crisis in decades.

Police fired round after round of tear gas and protesters took cover behind umbrellas between the local headquarters of China’s People’s Liberation Army and the government. Protesters also threw bricks dug up from pathways at police.

Many shops and restaurants in protest areas popular with tourists were shuttered, while curious visitors peered out from windows of some luxury hotels overlooking the demonstrations.

Protest numbers had dwindled by the early hours of Sunday, with just a few hundred demonstrators and some riot police visible.

The water cannon unleashed blue-dyed water, to make it easier for police to identify protesters.

Riot police then marched on foot toward the neighboring Admiralty district, followed by 20 police cars, where protesters had thrown fire bombs from flyovers, some landing close to police. Others shone blue and green lasers at police lines.

There were unconfirmed reports of an off-duty policeman being wounded.

In the neighboring Wanchai bar and restaurant district, police fought running battles with protesters, some beating them with truncheons, according to Reuters witnesses. There were several arrests.