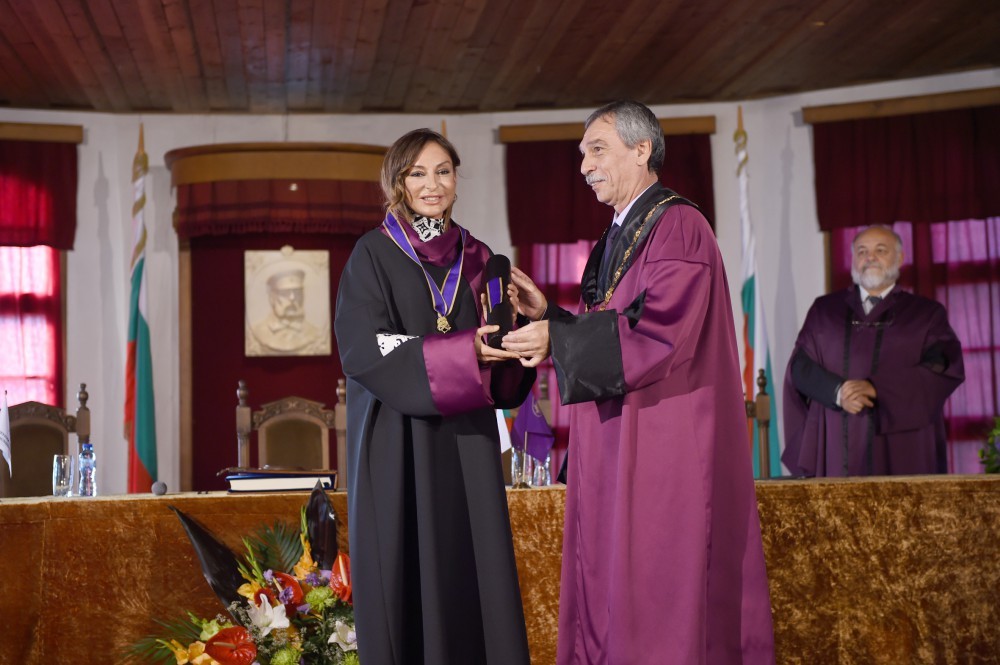 Azerbaijan’s first lady, president of the Heydar Aliyev Foundation Mehriban Aliyeva has received diplomas of an honorary citizen of the Bulgarian city of Veliko Tarnovo and an honorary doctor of St. Cyril and St. Methodius University of Veliko Turnovo. The ceremony to present the diplomas to the Azerbaijani first lady was held at Renascence and Constituent Assembly museum in Veliko Tarnovo.

The host of the ceremony said the status of an honorary citizen was awarded to first lady Mehriban Aliyeva for her outstanding contribution to the protection and promotion of cultural heritage of Veliko Tarnovo.

Mehriban Aliyeva was presented with the diploma and badge of the honorary citizen.

In her speech, the Azerbaijani first lady said it is “a great honor for me to become an honorary citizen of the city of Veliko Tarnovo”. “At the Heydar Aliyev Foundation, we are very happy to have been able to contribute to the restoration of the national heritage of the Bulgarian people.”

Mehriban Aliyeva praised relations between Azerbaijan and Bulgaria, saying the two countries were bound together by ties of history, mutual respect and mutual interests.

She hailed recent dynamics in the cooperation between the two countries` cities and regions.

Bulgarian Prime Minister Boyko Borisov said the people of a Christian Bulgaria were very happy that a Muslim Azerbaijan restored a religious and cultural monument in their country.

Mehriban Aliyeva then was presented with the diploma and robe of an honorary doctor of St. Cyril and St. Methodius University of Veliko Turnovo.

Chairman of the university`s General Assembly Radoslav Radef said the Azerbaijani first lady was named an honorary doctor for her outstanding contribution to the protection of the cultural legacy of Bulgaria.

The Azerbaijani first lady thanked the management of St. Cyril and St. Methodius University of Veliko Turnovo for awarding her an honorary doctorate.

Mehriban Aliyeva then signed the guest book of the university.

Azerbaijani first lady Mehriban Aliyeva and Leyla Aliyeva then attended a laser show on the occasion of the Independence Day of Bulgaria.