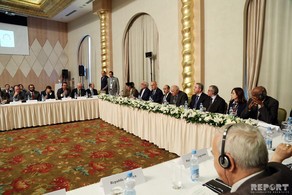 Baku has hosted a conference of the Journalists Association of the Organization of Islamic Cooperation Member States.

Addressing the event, they stressed importance of information exchange between Muslim countries.

At the end, the attendees have adopted a statement. The statement declares that the religion of Islam played an important role in the formation and development of progressive universal system, the world's cultural heritage and ideals of humanism. It was mentioned that reporters are also worried about current negative processes that threaten security of many Muslim countries, even destabilization, occurrence of situations, threatening the lives of millions of people: "We note with regret that Islamophobic circles in the west, transnational media, managed by them, presents what is happening in the Muslim world in a biased way.

Therefore, wrong impression is formed in the international community about Muslim countries and the religion of Islam. Thus, Islam is identified with terrorism. The current situation necessitates elimination of the differences existing in Muslim countries for the sake of general interest, formation of a single stand as well as strengthening of mutual relations in the field of information".