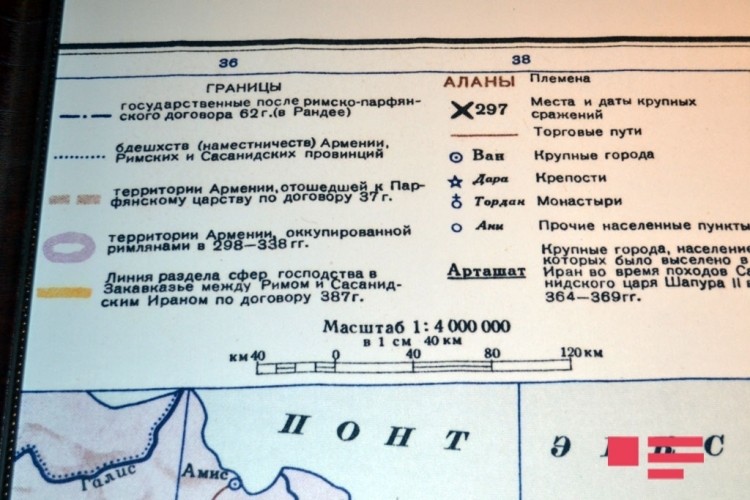 The Armenians committed another provocation against Azerbaijan in Russia.


Moscow correspondent reports that stone monuments, clay pots, swords, shields and other archaeological evidences found during archaeological excavations in Western Azerbaijan, carpets allegedly woven in the Nagorno-Karabakh region of the Azerbaijan that they call “Artsakh” and women's traditional costumes are being displayed at the exhibition entitled "Armenia: Legend of being " that was opened in the State Historical Museum on Moscow's Red Square on March 11.


Furthermore, the Armenians are demonstrating “historical” maps showing the Azerbaijani territories as part of "Great Armenia".


Exhibits showcased at the two-part exhibition were brought from the History Museum, the Museum of the Mother See of Holy Etchmiadzin and the Matenadaran Institute of Ancient Manuscripts.

Armenians, living in fiction of "Great Armenia" basing on church legends and traditions, are describing Urartu that existed in Asia and current territory of the Caucasus (in the 9th- 7th century BC), Albania and other states as the Armenian states.

Armenians are showcasing on of the exhibits under the name of “stone memorial plaque "Nor Nakhchivan 1875”” and wrongly inform the Russian community that Nakhchivan is the territory of Armenia.

Eastern Turkey, more than half of current territories of Azerbaijan, Nagorno-Karabakh, the Kura-Araz lowland, Talish mountains, area till the Caspian Sea, part of South Azerbaijan, Lake Urmia are described as the territories of Armenian in 1st-4th centuries.

Claiming that Armenia was the first state to adopt Christianity, the Armenians are displaying the monuments belonging to the Albanian church as the monuments of Armenian church.

For example, cross stones found in ancient Albania are being demonstrated as Armenian khachkars at the exhibition. However, the spread of Christianity among the Armenians later than Albanians is one of the facts that frustrates the Armenians’ desire to present ancient Albanian cross stones as Armenian khachkars. Evidences of early spread of Christianity in the Caucasian Albania are reflected in the works of Albanian historians (Moisey Kalankatuyski, Mkhitar Gosh), as well as in Armenian Catholicos Abraham’s letter to the Caucasian Albanians. The text is about the confrontation of Albanian Apostolic Church and Armenian Grigoryan Church as dyophysite and monophysite. “Armenians converted to Christianity in the 43rd year with the Greek history 270 years later than Albans”. (Kalankatuyski, II, 47) This information is valuable because of the exact time of Armenians’ converting to Christianity. 43 plus 270 is 313. This is the date of the Edict of Milan, which confirmed freedom of religion and faith in Rome. Armenians received Christianity in that period when they became vassals of Roman Empire. And the history of the Armenian Grigoryan Church (as well as Khachkars) started from that period.

Thus, cross stones belonging to the middle of the 4th century were impossible to be belonged to the Armenians at least because of the fact that Armenians didn’t convert to Christianity in that period and they couldn’t have any khachkars. Generally, it is absurd to find any Armenian khachkar in any region of the Caucasus till late 15th century. Because, it is not known whether Armenians compactly inhabited in any region of the Caucasus.

However, Armenia’s exhibition shows that the khachkar stones belong to the second and third centuries and subsequent periods.

Armenians also display carpets that have been allegedly woven in “Artsakh” in the end of the 19th century. It is doubtful those carpets were woven in the territory of Nagorno-Karabakh.

Moreover, among the exhibits are “Artsakh” women costumes as well. Thus, Armenians try to bring to the attention of the Russian public that ancient Azerbaijani land Karabakh which they called “Artsakh”, belongs to them

The opening ceremony of “Armenia: Legend of being” exhibition which took place on March 11 was attended by Ministers of Culture of Russia and Armenia.

Armenian President Serzh Sargsyan, who was on a visit to Moscow on March 10-11, also visited the exhibition.

In the exhibition that will last three months until June 13, Armenians will familiarize Moscow residents who have great interests in historical exhibitions and cultural events in general, as well as numerous foreign tourists visiting the Russian capital with their so-called history.