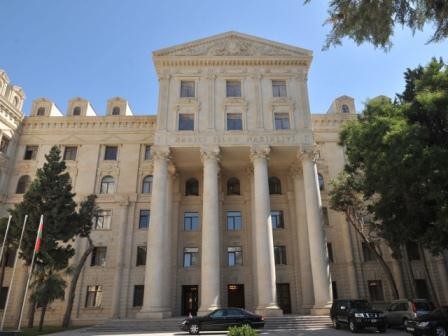 Azerbaijan calls for the international community to demand from Armenia to withdraw its troops from all occupied lands and to engage constructively in the Nagorno-Karabakh conflict settlement process, the Azerbaijani foreign ministry said.

On April 2, 2016 Armenia targeting civilians densely residing in the territories adjacent to the frontline area opened intensive heavy weapons fire at the positions of Azerbaijan’s armed forces along the line of contact.

As a result of artillery attacks of Armenian armed forces a number of civilians were killed and seriously wounded. Substantial damages were also inflicted upon the private and public properties, the statement said.

The armed forces of Azerbaijan have taken the necessary counter measures within its internationally recognized borders to ensure the safety of civilian population, to stop the provocations of Armenia and to deter it from further acts of aggression. Currently, the situation remains tense. Shelling of Azerbaijan’s positions along the contact line with heavy weapons, including with artillery continues.

Over the past years such violations and armed provocations of Armenia by attacking and killing Azerbaijani military personnel as well as civilians with the use of mortars and large-caliber machine guns and artillery have become more frequent and violent.

Armenia’s desperate attempts to blame Azerbaijan for the escalation of the situation in the frontline aimed at misleading its own people and the wider international community, the statement said.

Azerbaijan has repeatedly brought to the attention of the international community that the illegal presence of Armenian armed forces in the occupied territories of Azerbaijan remains a main cause for the escalation of situation and continues to pose threat to the regional peace and stability.

Armenia, by consistent provocations and escalation of the situation, strengthening of its military build-up in the occupied territories, illegally changing the demographic, cultural and physical character of the seized lands, engaging in unlawful economic and other activities, including transfer of Armenian population into these territories pursues an apparent goal of annexation of Azerbaijan’s territories and consolidating the status-quo, which is unacceptable and unsustainable as it was also stated by the heads of states of OSCE Minsk Group co-chairs, the statement said.

It is Armenia that also blocks all initiatives of OSCE Minsk Group Co-Chairs, including the recent proposals of Russian Foreign Minister Sergey Lavrov to derail the negotiation process. It once again proves that the official Yerevan is not genuinely interested in seeking a political settlement of the armed conflict.

The fundamental basis for the settlement of the conflict is laid down in the United Nations Security Council resolutions 822(1993), 853(1993), 874(1993) and 884(1993) and the U.N. General Assembly resolution 62/243 (2008), which condemn the use of force against Azerbaijan and occupation of its territories and reaffirm the sovereignty and territorial integrity of Azerbaijan and the inviolability of its internationally recognized borders, the statement said.

In those resolutions, the United Nations reaffirmed that the Nagorno-Karabakh region is an inalienable part of Azerbaijan and demanded immediate, complete and unconditional withdrawal of the occupying forces from all occupied territories of Azerbaijan.

The military occupation of the territory of Azerbaijan does not represent a solution and will never produce a political outcome desired by Armenia. The sooner Armenia reconciles with this reality, the earlier the conflict will be resolved and the countries and peoples in the region will benefit from the prospects of cooperation and economic development, the statement said.

Azerbaijan calls the international community to demand from Armenia to cease the illegal occupation of Azerbaijan’s territories, to withdraw its troops from all seized lands and to engage constructively in the conflict settlement process in accordance with the requirements of relevant resolutions of the UNSC and the norms and principles of international law.