Armenia continues to violate the ceasefire 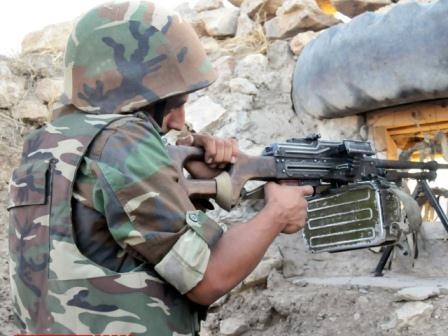 Armenian armed forces have broken the ceasefire with Azerbaijan on the frontline in Fuzuli, Terter and Aghdam districts.

According to the ministry, the fighting currently continues.

Earlier Azerbaijan unilaterally suspended the counter-attacks and response measures in the territories occupied by Armenia, in accordance with request of international structures.

The counter-attack was made following provocations of the Armenian armed forces at night of April 2, which resulted in deaths and injuries of civilians.

Six Armenian tanks, 15 gun mounts and reinforced engineering structures have been destroyed and more than 100 servicemen of the Armenian armed forces were wounded and killed during the fights, the ministry said.

Twelve servicemen of the Azerbaijani armed forces heroically died, one Mi-24 helicopter was shot down and one tank damaged by a mine, according to the ministry.