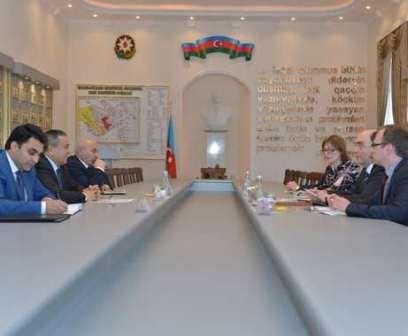 Farhadov informed the German MP about the activity of the Committee, Armenian-Azerbaijani Nagorno-Karabakh conflict, and the history of Armenia`s aggressive policy against Azerbaijan.

He underlined that 20 percent of Azerbaijani territories had been occupied by Armenia and more than one million people became refugees and IDPs as a result of the conflict.

The deputy chair noted that the UN Security Council adopted several resolutions demanding immediate withdrawal of Armenian troops from Azerbaijan`s territories. He expressed regret over the fact that the OSCE Minsk group couldn`t achieve any success as a mediator.

Following the meeting, the German MP familiarized himself with the living conditions of IDPs settled in the hostel of Azerbaijan Technical University, and visited the settlement for IDPs in Masazir district.