Global forum in Baku was successful 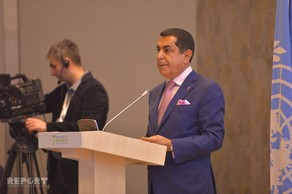 He thanked the Azerbaijani government for the support of the United Nations Alliance of Civilizations, noting that the forum has achieved all its objectives.

In turn, Minister of Culture and Tourism Abulfas Garayev said that, in general, the work and organization of the forum was attended by about 6 thousand people, including volunteers. Directly, the forum brought together 1516 people, including 705 officials (at the level of ambassadors, ministers, prime ministers and heads of state) from 120 countries. During the three days of work of the Forum, 41 events have been organized.

"The forum has achieved its goals. In the framework of the forum an important political document - Baku Declaration was adopted, the document reflects the unity in terms of cultural understanding", minister A. Garayev said.