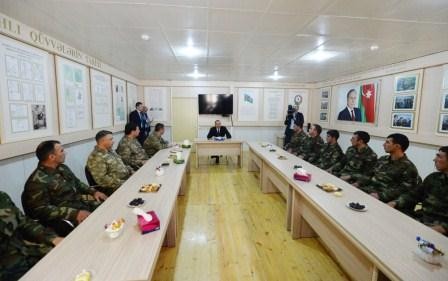 "The opposite side has already realized that there is no ground to ensure the interests using armed forces."

Azerbaijani President Ilham Aliyev made the remarks during the meeting with the personnel of a military unit in Azerbaijan's Tartar district.

The head of state said that all efforts are futile. "Just to establish peace in the region, the occupation must be ended. I am convinced that will be the case, "- he stressed.

Azerbaijani President also noted that army building is the priority of the policy pursued by the Azerbaijani government: "It is natural. Because we live in a state of war. The war is not over yet. The ceasefire was established in 1994. However, Armenia constantly grossly violates ceasefire. Especially when they see growing international pressure against them over the conflict, they more violate the ceasefire and resort to various armed provocations."