Efforts to resolve NK conflict must not be let go vain 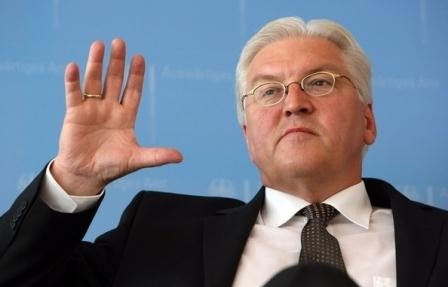 He made the remarks in Vienna May 16 ahead of a meeting between the Azerbaijani and Armenian president with the participation of the OSCE Minsk Group co-chairs.


“These days we’re not only concerned by the conflicts in Libya and Syria, but also the Nagorno-Karabakh conflict,” Steinmeier said.


According to him, the fierce fighting along the contact line between Armenian and Azerbaijani troops six weeks ago indicated that the status quo is untenable in the long term.

“The more the conflict prolongs, the higher will be the risk of a similar escalation and even that of a new war between Azerbaijan and Armenia,” he warned.

Steinmeier pointed out that the OSCE plays an important role in resolving the Nagorno-Karabakh conflict.


France, Russia and the US have been throughout many years trying as the OSCE Minsk Group co-chairs to consolidate the ceasefire agreement and resume the political process, he added.

“We believe that establishing and strengthening ceasefire, agreeing on strengthening trust and starting the negotiation process should be the goal," he said. "It will take some time, there will be no solution in a night, but it doesn’t mean that efforts to resolve the conflict must be let go vain.”