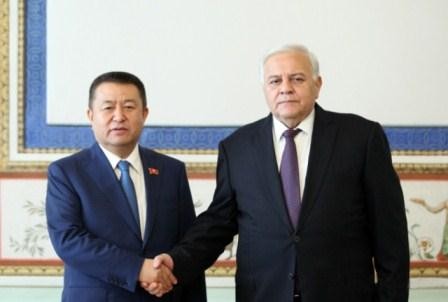 Parliament Speaker of Azerbaijan Ogtay Asadov has met Chynybay Tursunbekov the Speaker of the Kyrgyz Parliament.

The Parliament Speaker highlighted inter-parliamentary cooperation between the two countries. On the activity of the Working Group on Azerbaijani-Kyrgyz Inter-parliamentary ties, Mr. Asadov said relations between the two countries created fruitful condition for development of bonds. The Speaker stressed the importance of boosting the economic ties.

The Speaker highlighted the cause and consequences of the Armenia-Azerbaijan, Nagorno-Karabakh conflict.

Chynybay Tursunbekov recalled his Baku visit, as well as his participation in the Baku Session of the Parliamentary Assembly of OSCE.