Britney Spears got her top teared at concert - Video 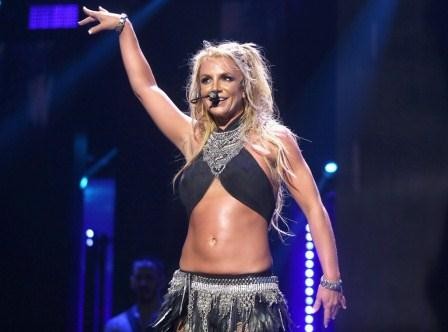 During her Las Vegas residency show on Saturday, it was business as usual for the 34-year-old pop icon as she made her way through another performance of her Piece of Me show at Planet Hollywood Resort and Casino.

However, things almost went horribly wrong when her black bra top unfastened during "I Love Rock N' Roll." In a video of the wardrobe malfunction shot by a fan, Spears was seen keeping her cool as two backup dancers tried to put the straps back together.

Though they quickly popped apart again, the songstress continued to perform as best as she could in place, poking fun at the awkward moment by crossing her eyes and making funny faces. Fortunately, her dancers were able to get the costume tied as she moved into the next part of the musical medley.

After transitioning into her hit "Gimme More," a backup dancer generously took off his collared shirt and offered it to the star to put over her bra and cut-off vest. She quickly put it on and carried on with the routine as usual because, if there's anything a lifetime of performing has taught her, it's that the show must go on.

This isn't the first time she's faced a wardrobe malfunction in Las Vegas. Just a week earlier, Spears was performing her routine for "3" in a black sheer bodysuit when it suddenly became unzipped and stuck. Though several backup dancers tried to pull the suit together, no one could get the costume to seal back up, but she carried on without hesitation.

Instead, Spears finished the routine with her entire back exposed—because no wardrobe malfunction will ever get Britney down.