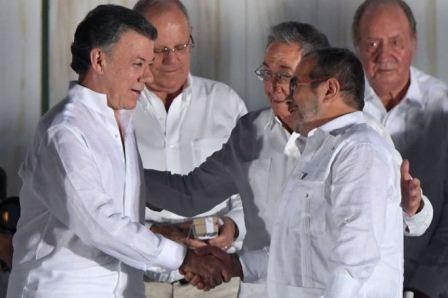 Colombian President Juan Manuel Santos has been awarded the Nobel Peace Prize for his efforts to end the 52-year conflict with left-wing rebels.

The Nobel committee in Norway praised him for his peace agreement with Farc rebels, signed last month after four years of negotiations.

However, Colombians narrowly rejected the deal in a vote last weekend.

The conflict has killed about 260,000 people. More than six million have been internally displaced.

"The Norwegian Nobel Committee has decided to award the Nobel Peace Prize for 2016 to Colombian President Juan Manuel Santos for his resolute efforts to bring the country's more than 50-year-long civil war to an end," said committee chairwoman Kaci Kullmann Five.

"The award should also be seen as a tribute to the Colombian people," she added.

The peace deal was rejected by 50.2% of voters who went to the polls on 2 October. Despite the result, Mr Santos vowed to continue with talks with the rebels.

Government negotiators have already returned to the Cuban capital Havana for further discussions with Farc leaders.

Critics, led by former president Alvaro Uribe, said the deal was too lenient to the rebels.

Under the agreement, special courts would have been created to try crimes committed during the conflict.
Those who confessed to their crimes would have received lighter sentences and would have avoided serving any time in conventional prisons.

The Farc would also have been guaranteed 10 seats in the Colombian Congress in the 2018 and 2022 elections.