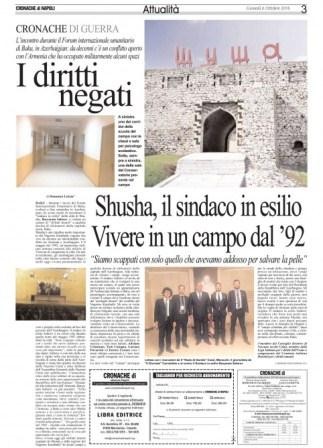 The article notes that as a result of Shusha’s occupation by Armenian armed forces on May 8 1992, Azerbaijanis that had been living for centuries in that city were forced to leave their lands.

In the article, Domenico noted that representatives of different religions and nationalities, including Armenians are peacefully coexisting in Azerbaijan, while Armenia is a mono-ethnic country which acts against multiculturalism. Domenico also pointed to four United Nations Security Council resolutions that demand withdrawal of armed forces of Armenia from Azerbaijani territories.

The Italian journalist also shares her impressions about IDP settlements that she visited in Baku.