4th Global Forum features session on the state of the world 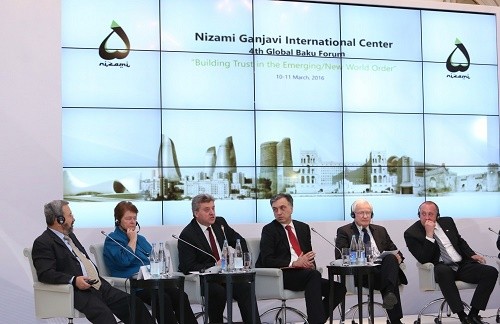 Following the official opening ceremony the 4th Global Baku Forum featured a session entitled “The State of the World Today and What We Need for Tomorrow to Tackle Most Pressing Issues”.

Moderator of the session former Prime Minister of New Zeeland James Bolger hailed the importance of “such an amazing forum”. He said the issue of refugees will be high on the agenda of the forum.

President of Albania Bujar Nishani thanked the Azerbaijani government for supporting the forum. The Albanian President hailed the fact that the forum focused on topical global problems.

Georgian President Giorgi Margvelashvili drew the audience`s attention to regional problems, and Georgia`s European integration. The Georgian leader said his country was actively cooperating with all neighbors in order to restore stability in the region. He said strategically important projects were being implemented in the region.

President of the Montenegro Filip Vujanovic thanked the Nizami Ganjavi International Center for “the excellent organization” of the forum, noting that the event provided a significant platform for seeking ways of addressing global challenges. The Montenegrin President said the international community had to make serious efforts to eliminate poverty, create equal education opportunities for all and tackle climate change.

Macedonian President Gjorge Ivanov said countries and international organizations had to take an active and serious approach to conflict resolution.

Former President of Finland Tarja Halonen said the main goal was to ensure lasting peace and sustainable development throughout the world, noting that apart from countries themselves, non-governmental organizations also played a vital role in this process.

Entitled “Towards a Multipolar World”, the Global Baku Forum is organized by the Nizami Ganjavi International Center in partnership with Azerbaijan State Committee on Work with Diaspora.

Over 300 delegates from 53 countries are discussing priority issues such as the future of East-West relations, radicalization and extremism, region-specific challenges and opportunities, energy security and inter-faith dialogue, among others.

The event provides a platform for incumbent and former presidents, prime ministers, ministers and leading experts in the field to assess the current state of the world, the most pressing threats to international security, and potential routes to the resolution of problems.