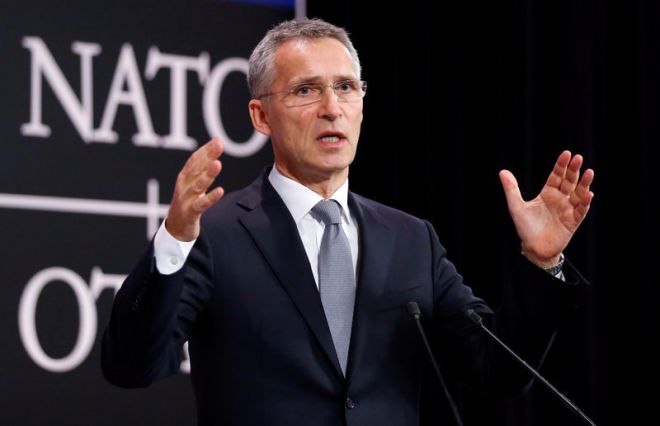 Trump questioned during his election campaign whether the United States should protect allies seen as spending too little on their defense, raising fears that he could withdraw funding for NATO at a time of heightened tensions with Russia.

"The president-elect and the secretary general both underlined NATO's enduring importance and discussed how NATO is adapting to the new security environment, including to counter the threat of terrorism," NATO said in a statement after a phone conversation between Trump and Stoltenberg.

The NATO statement said the Republican Trump, who will succeed Democratic President Barack Obama on Jan. 20, is expected in Brussels for a NATO summit next year.

The two leaders also addressed defense spending and agreed that "progress has been made on fairer burden-sharing, but that there is more to do" - underlining the fact that the United States spends far more on defense than Europe does.

After the break-up of the Soviet Union a quarter of a century ago, NATO's European members cut defense spending to historic lows, leaving the United States to make up around three quarters of the alliance's military expenditure.

A more assertive Russia under President Vladimir Putin has begun to change the picture and European governments are again spending more.

But Britain, Poland, Greece and Estonia are the only European nations to meet a NATO goal of spending at least 2 percent of gross domestic product on defense. Germany, Europe's biggest economy, spends far less than 2 percent of its GDP on defense.

Speaking before the phone call, Stoltenberg told a conference in Brussels that European defense spending was one of his top priorities and that he had raised it with every NATO member, winning support from defense ministers.

He said the main obstacle was convincing the respective finance ministers who have the keys to treasuries.

"You have to increase defense spending when tensions go up," Stoltenberg said, citing as evidence failing states in North and West Africa, the threat of Islamist militants and Russia's 2014 annexation of Ukraine's peninsula of Crimea.

"Stop the cuts and gradually increase (defense spending) to reach 2 percent (of economic output) is a very robust message. We have started to move although there is a very long way to go. I am certain Trump will make this his top priority (for NATO)."

Trump's campaign suggestion of making U.S. defense of its European allies conditional appeared to question the central tenet of NATO - namely that an armed attack against one ally is an attack against all.

Stoltenberg has said he expects an overall 3 percent real increase in European defense spending in 2016. He said on Friday that if all European allies and Canada reached the 2 percent spending target, it would yield an extra $100 billion for NATO.

European Council President Donald Tusk also spoke to Trump by phone on Friday. An EU source said Tusk emphasized the importance of transatlantic cooperation, including on Ukraine, where Russia has supported separatist rebels against government forces in the east of the former Soviet republic.

Trump's promise to improve Washington's chilly relations with Russia's Putin have caused jitters within the EU, particularly eastern member states like Poland and the Baltics.