Fire breaks out in girls dorm in southern Turkey 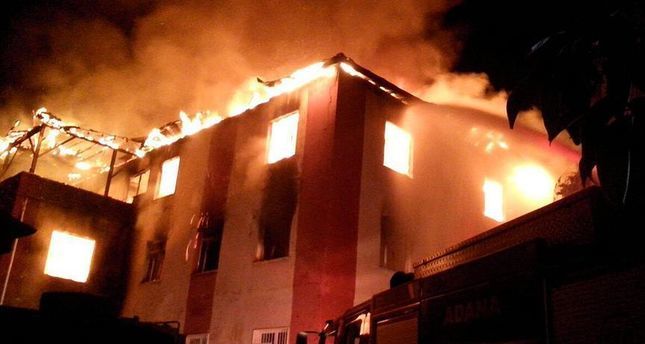 12 people were killed and several others were wounded after a fire broke out in a girls dormitory in southern province of Adana on Tuesday.

A worker and 11 middle and high school students aged 10-16 were killed in the fire, the head of the fire brigade department in Adana said.

Adana Governor Mahmut Demirtaş later confirmed the toll and added that 22 others were saved and sent to hospital. Demirtaş said the injured students were affected by the smoke and some of them were hurt by broken glass while they were fleeing the building.

He stated that the fire broke out after an electrical meter in the building caught fire, but the investigation was still underway.

The governor added that the 3-storey building had been evacuated as fire crews battled with blazes at the school girls' dormitory.

President Recep Tayyip Erdoğan telephoned Demirtaş early Wednesday and received an update on the situation, according to presidential sources.

Erdoğan said he was deeply sorry for the fire and wished Allah's mercy on those who lost their lives while hoping for a quick recovery for the wounded.

The fire may have been caused by an electrical fault, Ömer Çelik, a senior government official who represents Adana province in parliament, told broadcaster CNN Turk.

The ministry of education said that the dorm's capacity was about 54 people but only 34 students had been staying in the dorms.