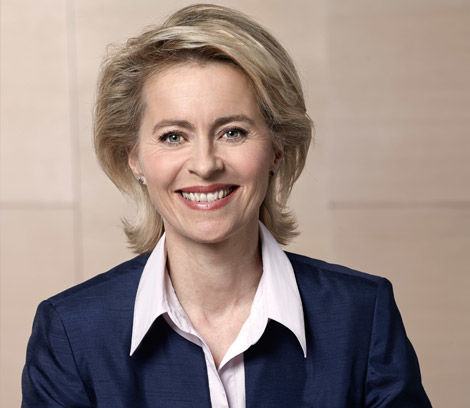 Von der Leyen said that she "respect[s] the customs and traditions of the country," but added that, "No woman in my delegation will be required to wear the abaya, as the [right] to choose one’s attire is a right shared by men and women equally".

Her announcement came days after German Chancellor Angela Merkel called for a ban on the burqa head covering in Germany.

During a meeting with Deputy Crown Prince Mohammad bin Salman al Saud, her counterpart in Saudi Arabia, Von der Leyen wore a dark blue suit while al Saud donned the traditional ghutrah head covering and white thobe garment. After images of Von der Leyen dressed in European clothing appeared in Saudi News, Saudis tweeted their disdain. Al Bawaba translated one tweet as, "The German Defense Minister: Not wearing the hijab in Saudi was deliberate. This is an insult to Saudi Arabia!

The two defense officials discussed Berlin support for training Saudi officers who will be traveling to Germany to study in 2017. Arab News quotes German Embassy official Michael Ohnmacht saying after the meeting, "The talks between Deputy Crown Prince Mohammed and the German minister focused on ways and means to beef up Saudi-German cooperation in different areas including high-level exchanges, personnel education and training, defense, mutual visits and security affairs."

There was a popular similar response in the Saudi twitterverse after US First Lady Michelle Obama did not don a hijab while visiting Riyadh with her husband, US President Barack Obama, for the funeral of King Abdullah. Hashtags #Michelle_Obama_Immodest and Michelle_Obama_NotVeiled trended briefly on Twitter, and some members of the all-male Saudi delegation shook the first lady’s hand while others merely nodded while walking past her.