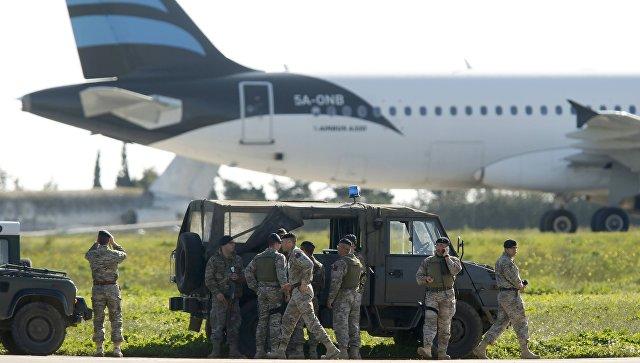 Hijackers armed with what were probably replica weapons forced an airliner to land in Malta on Friday before freeing all their hostages unharmed and surrendering, having declared loyalty to Libya's late leader Muammar Gaddafi.

Television pictures showed two men being led from the aircraft in handcuffs. The prime minister of the tiny Mediterranean island, Joseph Muscat, tweeted: "Hijackers surrendered, searched and taken in custody".

The Airbus A320 had been on an internal flight in Libya on Friday morning when it was diverted to Malta, 500 km (300 miles) north of the Libyan coast, after a man told the crew he had a hand grenade.

Muscat said the grenade and two pistols the hijackers were also carrying appeared to be replicas, according to an initial forensic examination.

A Libyan television channel reported it had spoken by phone with a hijacker who described himself as head of a pro-Gaddafi party. Gaddafi was killed in an uprising in 2011, and Libya has been racked by factional violence since.

With troops positioned a few hundred meters (yards) away, buses were driven onto the tarmac at Malta International Airport to carry away 109 passengers, as well as some of the crew. Television footage showed no signs of struggle or alarm.

After the passengers had left the plane, a man briefly appeared at the top of the steps with a plain green flag resembling that of Gaddafi's now-defunct state.