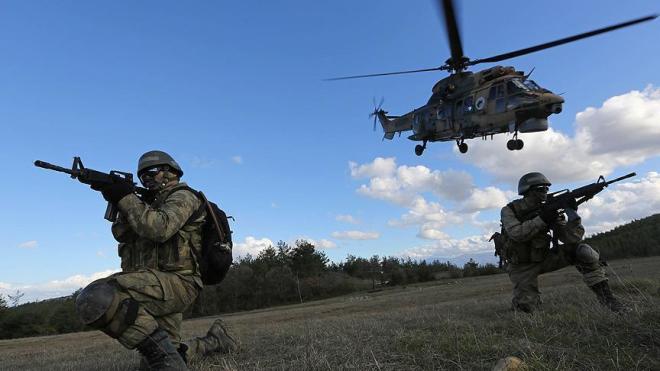 Forty Daesh terrorists were “neutralized” during the ongoing Operation Euphrates Shield in Al-Bab in Syria since Thursday night, according to the Turkish military Friday.

Turkish General Staff said in a statement that 18 Daesh terrorists were neutralized in Al-Bab. The terror group's military headquarters was also destroyed.

In an earlier statement, the Turkish military said 22 Daesh terrorists were also “neutralized” in Al-Bab. According to the military, 51 Daesh targets were hit and 37 buildings, including those used for accommodation, weapon emplacement and defense purposes, three armories and one logistics center were destroyed in the city alone.

The Turkish military usually uses the term neutralized to refer to dead or injured or captured terrorists.

The Turkish army supports the Free Syrian Army (FSA) fighters to liberate Al-Bab from Daesh, a strategic city for the terrorist group. Friday marks the 122nd day since the city was surrounded in order to liberate it.

The operation is part of the Turkey-led Operation Euphrates Shield which began in late Aug. to improve security, support coalition forces, and eliminate the terror threat along Turkey’s border using FSA fighters backed by Turkish artillery and jets.

Since the launch of the Operation Euphrates Shield, the Turkish explosive ordnance disposal teams neutralized 2,208 handmade explosives and 42 mines in areas cleaned from Daesh.