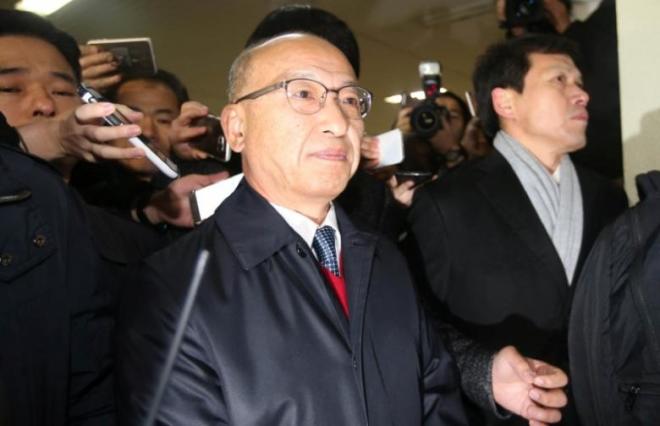 South Korean prosecutors put the chairman of the world's third-largest pension fund under emergency arrest on Wednesday in a widening influence-peddling scandal that has led to parliament voting to impeach President Park Geun-hye.

The special prosecutor's office did not provide further details on the arrest of National Pension Service (NPS) Chairman Moon Hyung-pyo. Officers on Monday raided his home on suspicion of abuse of power.

The special prosecutor has been looking into whether Moon pressured the pension fund to support the $8 billion merger last year of two Samsung Group affiliates while he was head of the Ministry of Health and Welfare, which runs the NPS.

Investigators are also examining whether Samsung's support for a business and foundations backed by the president's friend, Choi Soon-sil, who is at the center of the influence-peddling scandal, may have been connected to NPS support for the merger, a prosecution official told Reuters last week.

Moon said on Tuesday, as he arrived at the prosecutor's office, he would cooperate and did not comment when asked if he pressured the NPS to vote for the merger.

On Dec. 9, the NPS dismissed as "groundless" a media report that Moon had coerced the NPS to support the merger.

The NPS had 545 trillion won ($451.35 billion) under management at the end of September and was a major shareholder in Samsung Group affiliates Cheil Industries Inc and Samsung C&T Corp when they merged last year.

Some investors criticized the tie-up for strengthening the founding family's control of Samsung Group, South Korea's largest "chaebol", or conglomerate, at the expense of other shareholders.

The NPS voted in favor of the merger without calling in an external committee that sometimes advises it on difficult votes.

A spokeswoman for the NPS said on Wednesday it was "watching the situation" and declined to comment further.

TV footage showed Moon arriving in a detention center van at the office of the special prosecutor, escorted by guards and wearing a prison uniform. He declined to answer reporters' questions.