Putin: Those are 'worse than prostitutes' 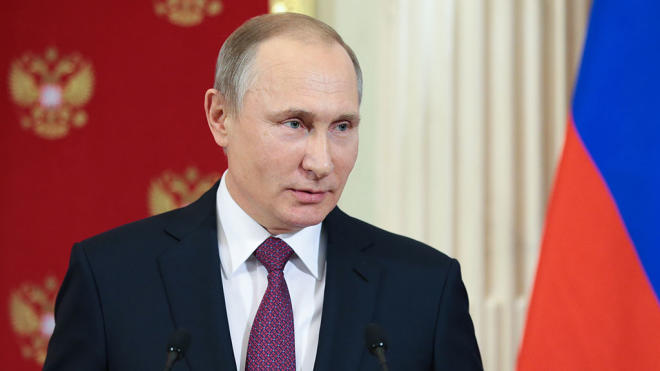 Axar.az reports that, Putin noted that an internal political struggle is underway in the United States despite the fact that the presidential election is over. "In my opinion, there are several goals, some are obvious. The first is to undermine the legitimacy of the elected president of the United States. Incidentally, in this connection I would like to note that — whether people who do it want it or don't want — they greatly damage US interests." "It seems that they trained for this in Kiev and now are ready to organize a 'Maidan' in Washington not to let Trump assume office," Putin said.

"The second goal is to tie the hands of legs of the newly-elect president related to the implementation of his pre-election campaign's promises to the American people and the international community," he added. He also said that reports of alleged Russian dossier on Trump are fake as "our security services do not chase every US billionaire." "These claims are an obvious fake. Trump, when he came to Moscow a few years ago was not a politician. We did not even know about his political ambitions, he was just a businessman, one of the richest men in America. Is someone really thinking that our intelligence agencies are chasing every American billionaire, or what? Of course not! It's just a complete nonsense." Those who ordered the dossier on the US president-elect are "worse than prostitutes," Putin said. "Prostitution is an ugly social phenomenon…

But people who order such fakes which are now used against the elected president of the United States, fabricate information and use it in the political struggle, they are worse than prostitutes, they have no moral limits," Putin said. Putin said that such a situation shows a "significant degradation of political elites in the West, including in the US." However, he said that he hopes that common sense will prevail. "I hope that the common sense will prevail. It concerns the relations between the US and its allies, including in Europe. The outgoing administration involved many European political leaders in the American domestic struggle and current issues are a result of these activities."

The Wall Street Journal cited people familiar with the matter on Wednesday that ex-MI6 officer Christopher Steele was the author of the alleged dossier that was widely spread across media outlets, claiming about Donald Trump's alleged activities related to a "golden shower" on a trip to Moscow. The memos, which BuzzFeed admitted were unsupported and which the CNN did not fully disclose due to lack of independent corroboration, alleged that Russian intelligence had cultivated Trump and had collected compromising material on Trump. The Kremlin said earlier that Russia does not engage in collecting so-called compromising material on political figures.

He said that he didn't meet Trump and he has no reasons to "attack or defend him." "I don't know Mr. Trump, I have never met him, I don't know what he will do in the international arena, so I have no reason either to attack him, criticize him or defend him." Putin noted that there is a category of people who leave without saying goodbye, "out of respect for the present situation," while others say goodbye all the time, but do not go away. "The outgoing administration, in my opinion, belongs to the second category," he concluded.