12 of Istanbul blast victims were foreigners 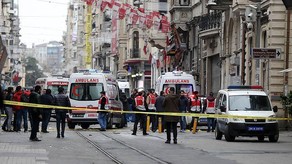 Mehmet Müezzinoğlu, Turkish Minister of Health, said in a later statement that 36 people were injured, and that 12 of the victims were foreigners.

The suicide bomber reportedly blew himself up and died at the scene. Initial reports suggest that the bomber might have accidentally detonated the bomb, since the location of the incident is relatively less significant than surrounding places.