Dutch PM is ready to de-escelate relations with Turkey 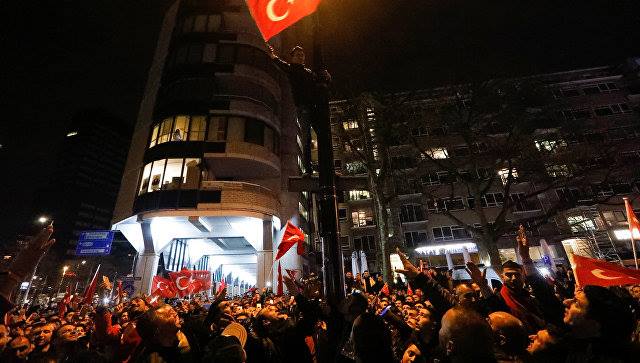 After an unprecedented diplomatic fight between the Netherlands and Turkey, Dutch Prime Minister Mark Rutte said Sunday he would seek to control the damage caused by the weekend incidents when he prevented two Turkish ministers from campaigning in the Netherlands.

At the same time, Turkey kept its drive going to rally people of Turkish descent living in European Union nations to back a referendum that would expand Erdogan's powers.

After being denied landing rights in the Netherlands on Saturday, Foreign Minister Mevlut Cavusoglu addressed crowds in the French city of Metz, where the French government had no qualms about permitting government representatives to Turkish rallies.

The Netherlands said Turkish attempts to campaign here touched at the heart of Dutch citizenhood, although hundreds of thousands have Turkish roots and many still feel committed to their ancestral homeland.

"The biggest problem in this case is that Turkey is talking about Turkish citizens who they want to talk to," Rutte said. "These are Dutch citizens who possibly also have voting rights in Turkey."

The diplomatic fight comes at a tough time in the Netherlands, which has national election on Wednesday, and where issues of Dutch identity and relations with migrant communities and Islam have taken center stage. In a neck and neck race, the parties of either Rutte or populist firebrand Geert Wilders could end up the most votes.

Rutte said it was important for his government not to bow to Turkish pressure, especially, he said, after Ankara threatened sanctions if the Dutch kept its ministers out.

Still, added the prime minister, his government "will keep working to de-escalate where we can. If the Turks choose to escalate, we will have to react, but we will do everything we can to de-escalate."