Republicans to hobble Obamacare even without repeal 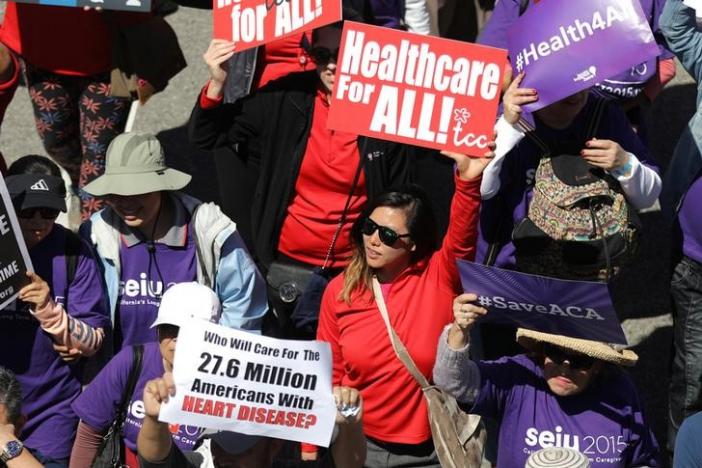 Republicans may have failed to overthrow Obamacare this week, but there are plenty of ways they can chip away at it.

Axar.az reports that the Trump administration has already begun using its regulatory authority to water down less prominent aspects of the 2010 healthcare law.

The delays offer a glimpse at how President Donald Trump can use his administrative power to undercut aspects of the Affordable Care Act (ACA), including the insurance exchanges and Medicaid expansion that Republicans had sought to overturn.

The Republicans' failure to repeal Obamacare, at least for now, means it remains federal law. Price's power resides in how to interpret that law, and which programs to emphasize and fund.

Hospitals and physician groups have been counting on support from Medicare - the federal insurance program for the elderly and disabled - to continue driving payment reform policies built into Obamacare that reward doctors and hospitals for providing high quality care at a lower cost.

The Obama Administration had committed to shifting half of all Medicare payments to these alternative payment models by 2018. Although he has voiced general support for innovative payment programs, Price has been a loud critic of mandatory federal programs that dictate how doctors should deliver healthcare.

Providers such as Dr. Richard Gilfillan, chief executive of Trinity Healthcare, a $15.9 billion Catholic health system, say they will press on with these alternative payment plans with or without the government's blessing. But they have been actively lobbying Trump officials for support, according to interviews with more than a dozen hospital executives, physicians and policy experts.

Without the backing of Medicare, the biggest payer in the U.S. healthcare system which Price now oversees, the nascent payment reform movement could lose momentum, sidelining a transformation many experts believe is vital to reining in runaway U.S. healthcare spending.

Price "can't change the legislation, but of course he's supposed to implement it. He could impact it," said John Rother, chief executive of the National Coalition on Health Care, a broad alliance of healthcare stakeholders that has been lobbying the new administration for support of value-based care.

The move Friday to pull the Republican bill only reinforces the risk to the existing law, which Trump said on Friday "will soon explode."

"It seems that the Trump Administration now faces a choice whether to actively undermine the ACA or reshape it administratively," Larry Levitt, senior vice president at Kaiser Family Foundation, wrote on Twitter.

"The ACA marketplaces weren't collapsing, but they could be made to collapse through administrative actions," he added.