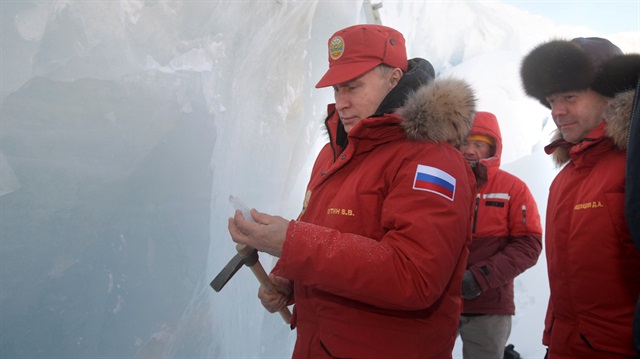 Russian President Vladimir Putin has visited an area in the Arctic archipelago as part of Russia's efforts to reaffirm its foothold in the oil-rich region.

On a tour on the Franz Josef Land archipelago, a sprawling collection of islands where the Russian military has recently built a new runway and worked to open a permanent base, Putin emphasised on Wednesday the need to protect Russia's economic and security interests in the Arctic.

"Natural resources, which are of paramount importance for the Russian economy, are concentrated in this region," Putin said in remarks carried by Russian news agencies.

Russia, the United States, Canada, Denmark and Norway have all been trying to assert jurisdiction over parts of the Arctic as shrinking polar ice creates new opportunities for exploration.

Accompanied by Prime Minister Dmitry Medvedev and Defence Minister Sergei Shoigu, he visited the cave of the Arctic Pilots Glacier and spoke with Russian troops.

The Kremlin has named reaffirming the Russian presence in the Arctic as a top priority amid an intensifying rivalry over the region that is believed to hold up to one-quarter of the planet's undiscovered oil and gas.

In 2015, Russia submitted a revised bid for vast territories in the Arctic to the United Nations, claiming 1.2 million square kilometres of Artic sea shelf extending more than 650km from the shore.

Putin said on Wednesday that Russia has remained open to a "broad partnership with other nations to carry out mutually beneficial projects in tapping natural resources, developing global transport corridors and also in science and environment protection".

He also underlined the need for the military and security agencies to "implement their plans to protect national interests, our defense capability, and protection of our interests in the Arctic".

Over the past few years, the Russian military has been conducting a costly effort to restore and modernise abandoned Soviet-era outposts in the Arctic by rebuilding old air bases and deploying new air defence assets in the region.

During the visit, Putin inspected a cavity in a glacier that scientists use to study permafrost. He also spoke with environmental experts who have worked to clean the area of Soviet-era debris.

Natural Resources Minister Sergei Donskoi reported to Putin the cleanup effort has seen the removal of 42,000 metric tonnes of waste from the archipelago, most of it rusty metal oil canisters left behind by the Soviet military.