"Ivanka doesn’t moderate Trump she sells him to..." 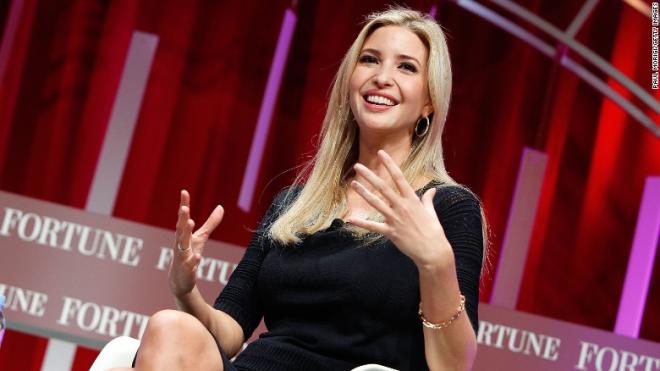 Are there still people out there who think that Ivanka Trump is a moderating influence on her father?

If you believe that – that the Donald Trump currently Big-Wheeling all over the Middle East is the toned-down version – can I just ask, respectfully: what exactly do you think Donald would be doing to the country if he wasn’t under the supposedly soothing spell of Ivanka? Outlawing renewable energy in favour of whale oil? Replacing the constitution with the lyrics to Ted Nugent’s Free for All? Just straight-up cannibalism?

That’s like saying that fur is a moderating influence on a wolf. (It’s so soft!)

Ivanka is not simply tolerant of her father’s blathering radicalism, let alone nobly embattled by it; she is an active proponent and beneficiary of the outrageous robbery her family is perpetrating against those they purportedly serve. Come on. She loves it. You can tell because she continues to be a beaming member of the administration instead of an estranged daughter who cries every day in her nest of shame.

The Guardian reported this week on the shocking brutality of the president’s budget proposal:

“Cuts to Medicaid over the next decade exceed even the more than $800bn reductions contained in a health bill passed by the House of Representatives earlier this month. The president also aims to slash welfare by $274bn over a decade, including $193bn on food stamps, driving millions of people off the programme … The blueprint also shaves 31.4% off funding for the Environmental Protection Agency and 29.1% off that for the State Department and other international programmes.”