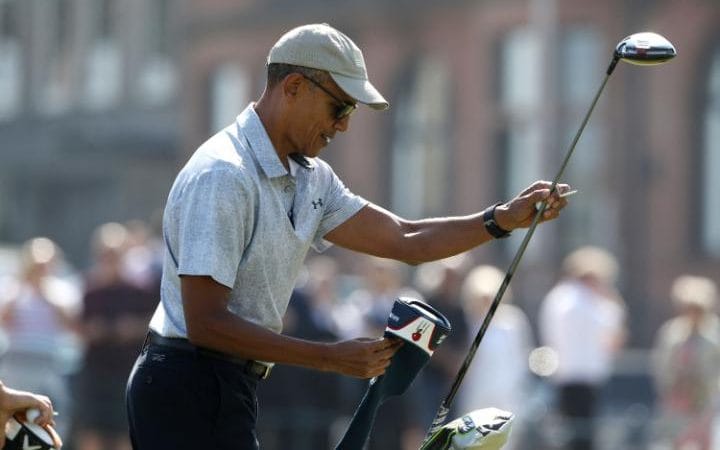 Former US president Barack Obama has teed off his first visit to Scotland with a round of golf in St Andrews.

Mr Obama could not resist a game on the Old Course at the home of golf in Fife.

He is expected to speak to business leaders in Edinburgh later in the day when he gives a speech for The Hunter Foundation.

Philanthropist Sir Tom Hunter was among the players involved in the game.

The former president's caddy reassured him there was "no pressure, sir" before he teed off on the third hole.

Mr Obama, who was hitting the ball last, said: "Well, going by those shots I shouldn't feel any pressure."

Despite heavy security, he wandered over to the crowds who had been following him on the course and shook hands with spectators before returning to his game.

He also visited a snack van and bought a drink before Sir Tom took his photograph with the vendor.

The Old Course was not closed off to other players and was being used by other members of the public.

The Democrat had earlier touched down at Edinburgh Airport on Friday morning, according to reports, before heading to the course.

He will later return to the Scottish capital for the charity dinner.