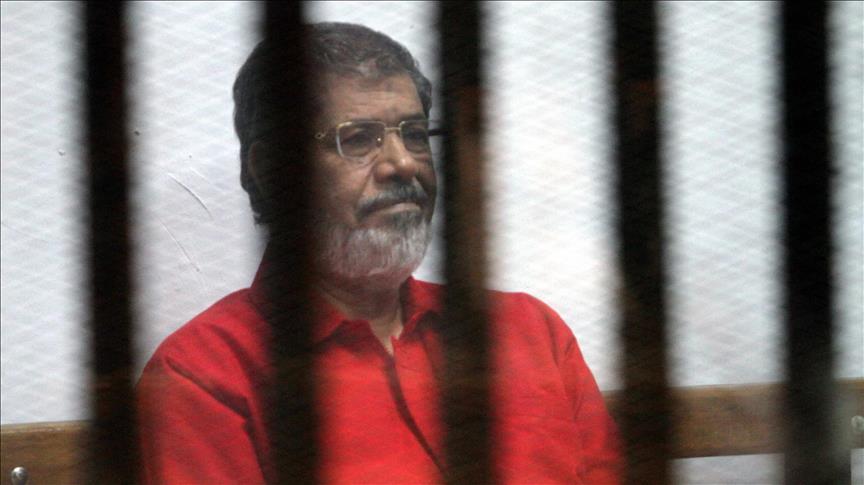 Egypt's first democratically elected president, Mohamed Morsi, who was ousted and imprisoned in a 2013 military coup, said Wednesday that he was refraining from eating prison food after having fainted twice, according to his lawyer and son.

This came in statements to Anadolu Agency made by Morsi’s son Abdullah and lawyer Abdel-Moneim Abdel-Maqsoud following a Wednesday session of a trial in which the former president and Muslim Brotherhood leader stands accused of escaping from prison in 2011.

“Today, while attending my father’s illegitimate trial, he appeared under the weather,” Abdullah Morsi said. “He asked to address the court but his request was refused.”

“He told those standing beside his cage that he had fainted twice since Sunday, going on to complain that he wasn’t receiving medical care,” he added.

“My father later told me that he was refusing to eat the food provided by the prison authorities,” Abdullah asserted.

“He has asked his lawyers to file a complaint with the public prosecution authorities asking that he be transferred to a private medical center, at his own expense, where he might receive the necessary medical care,” he added.

The Egyptian authorities, for their part, have yet to comment on Morsi’s assertions, but they typically claim that all prisoners in their care are provided with adequate food and medical treatment if needed.

Abdel-Maqsoud, for his part, told Anadolu Agency that he had passed Abdullah’s complaint on to the court, “which promised to refer it to public prosecutors for investigation”.

Members of Morsi’s defense team, he added, “will also report these disturbing developments to the attorney-general”.

Morsi has remained in prison since mid-2013, when he was ousted in a military coup after only one year in office. He faces a host of criminal charges, which he and his followers -- along with most impartial observers -- view as politically motivated.