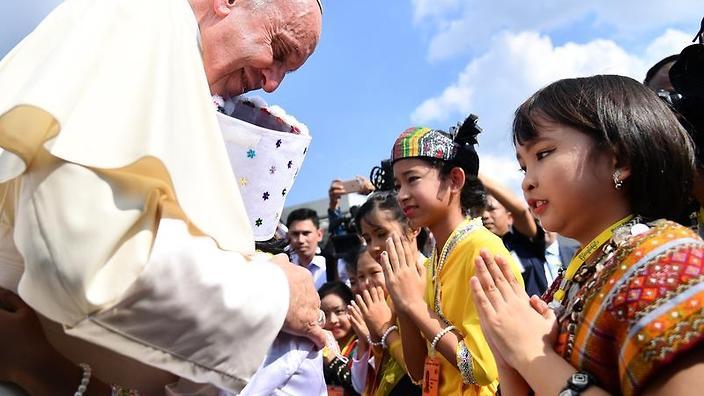 A former refugee and activist from the European Rohingya Council has written to Pope Francis to highlight the plight of Rohingya Muslims in Myanmar.

Axar.az informs that the pope arrived in Myanmar on Monday for his first visit to the country and Mohammed Rafique shared the letter on social media.

In his letter, Rafique, a representative of the council’s Ireland chapter, said: “You once said, ‘Life is a journey. When we stop, things don’t go right.’

“On your auspicious journey of friendship, love and peace, we would kindly like to request you not to stop using [the word] ‘Rohingya’ on the journey, which will ultimately do damage to the cultural and ethnic identity of the community that the successive military regime and Aung San Suu Kyi’s government have been trying to erase for many decades.”

The pope arrived in Myanmar amid pressure for him to address the persecution of Rohingya in the western state of Rakhine. More than 620,000 refugees have fled the region in the wake of a brutal military crackdown.

Rafique said the pope was advised by the Myanmar government “not to use the term 'Rohingya' during your visit to our country of origin.

"And told that it can divide the communities apart, particularly the minority Christian community.”

Francis will also visit Rohingya refugees in Bangladesh during his tour of the two countries.

Rohingya had been “stripped of citizenship, denied basic human rights such as freedom of religion, nationality, movement, education, healthcare and livelihood”, Rafique said.

Using the term adopted by the UN to described the military operation launched in August, he added that Rohingya were now “subjected to the textbook example of ethnic cleansing” and a “slow-burning genocide”.

Nowhere had there been such a large-scale campaign of genocide in modern times like that against the Rohingya, he said, accusing world leaders of turning a blind eye.

“We have no alternatives rather than hoping and believing individuals like you who dare to stand up against atrocities and defend basic human rights,” he told the pope.

“We, Rohingya, wish that your journey brings love and peace and adds a voice against the suppression of voices.”

During the crackdown, security forces and Buddhist mobs have killed men, women and children, looted homes and torched Rohingya villages, according to refugee accounts.

Speaking in September, Bangladeshi Foreign Minister Abul Hasan Mahmood Ali said around 3,000 Rohingya had been killed in the operation.

The international community has called on the Myanmar government and military to immediately halt atrocities and allow Rohingya to return home safely.