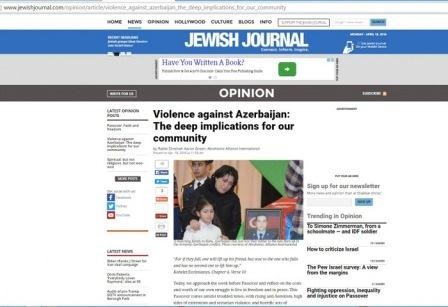 The US based Jewish Journal newspaper has published an article titled “Violence against Azerbaijan: The deep implications for our community”.

The article says: “The international community has repeatedly stated that the ongoing Armenian occupation of over 20% of the sovereign Republic of Azerbaijan, is completely illegal, designating the massacres committed against Azerbaijani people in the early 1990’s, at the start of the same occupation, as crimes against humanity. The atrocities of the 1990’s have resulted in over 750,000 Azerbaijani natives of Karabakh living as refugees ever since, unable to return home.

It nearly broke my heart to read the news last week, of the Armenian attacks, of the spraying of bullets against unarmed Azerbaijani civilians in the same place where invaders committed massacres so recently, and without substantial recourse to date.

Azerbaijan’s longstanding and unabashed support for the State of Israel is a worthy enough reason to raise our community alarms for their current crisis. Jewish people across the world, and especially in Israel, face a familiar uncertainty from forces of hatred that have proven powerful enough to be rightfully feared. Many here are troubled by what they perceive as an unprecedented shakiness for the future of security in the Jewish homeland, and question the state of American support, long considered unwavering. Time will tell the future story of American loyalty to Israel, yet we know with certainty that Azerbaijan and Israel share over 20 years of deep, strategic alliance, and we know with certainty that Israel needs her allies intact.

“Only 25 years ago, in the same region of Nagorno-Karabakh, Azerbaijani people were subjected to what Israel’s President Reuven Rivlin likened to genocide, at the hands of the same invaders, in the name of the same occupation that is still continuing.” The article says.

“As propagandists the world over have long known, advantageous hate-mongering works to an unfortunately great extent, and the invaders of Karabakh have also invaded the nexus of our global dialogue. While we pray and hope for safety here in the U.S. and for Israel, and for the free world to remain free and to become a safe and peaceful home for people of every faith and every culture, our unified voices and outcry must include those that have done the same for us, and suffered in similar ways to us, for far too long. As Azerbaijan faces another siege of violence today, let us stand beside our great friend, and support their hope and fight for freedom and peace. That dream is indistinguishable from our own.”