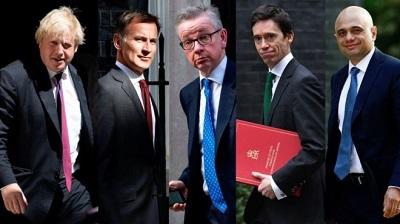 Sajid Javid has been knocked out of the Tory leadership race, leaving three contenders vying for the job and to be the next prime minister.

The home secretary received 34 votes, coming behind Jeremy Hunt with 59.

MPs are now voting in a fifth ballot to select the two candidates who will go through to a party membership vote.

The remaining two MPs will compete in a run-off of the party's 160,000 or so members, and the winner will be announced in the week of 22 July.