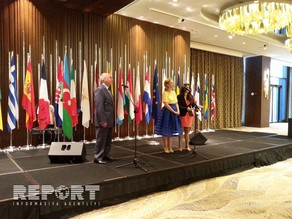 "Azerbaijan will continue to contribute to Europe's energy security."

Local media reports, it was stated by Deputy Foreign Minister Mahmud Mammadguliyev, speaking on the occasion of Europe Day in Baku.

Mammadguliyev said that in 2006, memorandum on energy cooperation signed between the European Union and Azerbaijan which has brought the results.

He reminded that ceremony of the project of Trans Adriatic Pipeline (TAP) will be held in Thessaloniki on May 17.

The Deputy Minister noted that Azerbaijan will continue to contribute to the energy security of Europe.

"We are confident that our cooperation will be further strengthened", - he added.

Mammadguliyev also thanked the European Union for its support for the territorial integrity of Azerbaijan. He expressed hope that the EU will continue its efforts in support of the settlement of the Nagorno-Karabakh conflict, and that the EU will contribute to the resolution of this problem.

"The EU is proud to be the largest trading partner of Azerbaijan", - she said, noting the importance of the project of the Southern Gas Corridor.