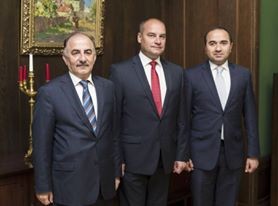 Member of the Azerbaijani Parliament, Head of working group on Azerbaijani-Latvian inter-parliamentary relations Kamran Bayramov has met Jaunsleinis Andris, head of Union of Local and Regional Governments of Latvia.

They discussed boosting cooperation between Azerbaijan and Latvia in the field of local self-government, as well as strengthening the bilateral activities of the municipal bodies.

The MP also met Gundars Daudze, Deputy Speaker of the Saeima of Latvia. They discussed prospects of Azerbaijani-Latvian inter-parliamentary ties, as well as potential of economic cooperation between the two countries.

Mr. Bayramov provided an insight a cause and consequences of the Armenia-Azerbaijan, Nagorno-Karabakh conflict, as well as the recent escalation taken place in the troops contact line. The MP stressed the significance of soonest settlement of the conflict.