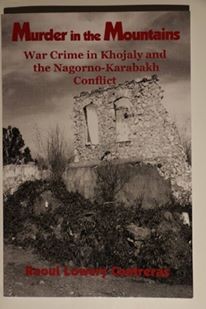 “Murder in the Mountains” book by Raoul Lowery Contreras, which highlights Khojaly genocide as well as Armenian occupation and ethnic cleansing policy against Azerbaijan, has today been published in Los Angeles by the Floricanto Press publishing house.

The book featuring the Khojaly incidents is the first one which was written on this topic, published and went on sale in the United States. The book is available at “Earth’s Biggest Bookstore” Amazon, U.S. largest bookstore Barnes & Noble, etc.

In the book, journalist Lowery delves into the complicated regional history but focuses on the town of Khojaly in the Caucasus Mountains on a cold night in February 1992. He charts the conflict there and its aftermath, providing documentation for human rights violations.

Lowery Contreras is an internationally recognized author who writes regularly for The Hill, Fox News Latino and dozens of publications around the globe. His passion is finding untold stories that can foster change in our world. He was formerly with the New American News Service of the New York Times Syndicate. Contreras, a former United States Marine with a deep knowledge of international affairs with a distinctly American viewpoint around freedom and liberty, is a rare commentator that tells true stories in a passionate way. This story of terror and war crimes resonated with him as a story that needs to be told.