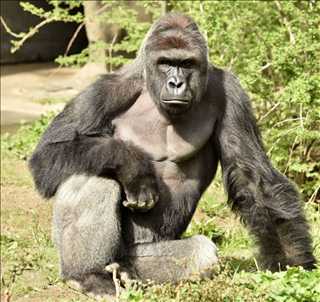 Zoo officials have shot dead a gorilla after a four-year-old boy fell into its enclosure in the US city of Cincinnati.

The boy climbed through a barrier and fell into a moat, where he was grabbed and dragged by the gorilla.

The zoo said it took action to shoot the 400lb (180kg) gorilla as the situation was "life-threatening". The boy is expected to recover.

Zoo director Thane Maynard said: "[The officials] made a tough choice and they made the right choice because they saved that little boy's life. It could have been very bad."

He said a tranquilliser would not have had a quick enough effect.

Mr Maynard said that although the boy was not under attack, he "certainly was at risk".

He added: "We are all devastated that this tragic accident resulted in the death of a critically-endangered gorilla. This is a huge loss for the zoo family and the gorilla population worldwide."

Two female gorillas in the enclosure did not approach the child and were unharmed.

Harambe was born in captivity in Texas and moved to Cincinnati zoo in 2014, where it was hoped he could be part of a breeding programme. Cincinnati zoo has had the largest number of western lowland gorilla births in the US.

Notably,Last week two lions were also shot dead in a zoo in Chile after a man entered their pen in an apparent suicide attempt.