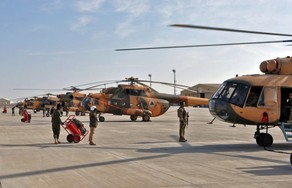 Azerbaijan warrants to support Afghan Air Forces and the country's security institutions. Establishment of long-term cooperation between the two countries is planned for this purpose.

During Baku meetings, the council's spokesman said that Azerbaijani side is ready to support Afghan armed forces, including assist in holding training for young Afghan pilots.

According to him, Azerbaijan is also ready to train Afghan cadets, provide medical assistance to country's security forces.