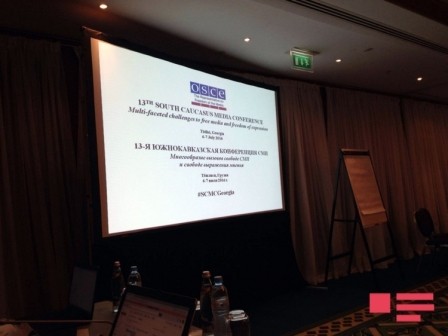 The joint statement on the outcome of the conference was put into discussion on July 7.

The Armenian delegation that took a passive part in the two-day discussions, made a proposal to add to the final document a paragraph condemning the inclusion of journalists in the “blacklist”, APA reported.

The Armenian delegation noted that the inclusion of foreign journalists, who illegally visit the occupied Azerbaijani territories, in the list of undesirable persons of Azerbaijan’s Foreign Ministry is unacceptable.

Speaking at the conference, members of the Azerbaijani delegation stated that the Armenians, with this step, are trying to distract the attention of the conference participants from discussion of the real situation of media in Armenia and cover up serious offenses taking place in their country.

The senior adviser of the Azerbaijani Presidential Administration's department on socio-political issues, Kamran Hasanov, said that the persons regardless of their positions, professional affiliation and status, who show disrespect to the territorial integrity of Azerbaijan and illegally visit the Armenian-occupied territories of Azerbaijan, are included in the list of undesirable persons of Azerbaijan’s Foreign Ministry.

“This is not a “black list of journalists” as the Armenian delegation claims, but the list of persons who show disrespect to the territorial integrity of Azerbaijan and therefore are listed as undesirable people. The Armenian delegation’s attempts to distort the essence of the matter and realize their provocative intentions are unacceptable and therefore this proposal should not be taken into account”, said the senior adviser.

The proposal is unfounded and biased, he said, adding that if this proposal is include in a final statement, the proposal of the Azerbaijani side should also be added to the document.

“The Azerbaijani delegation would agree with this amendment only if the provision envisages journalists’ respecting sovereignty and territorial integrity of the state and observing the rules of accreditation,” he said.

Azerbaijani MPs Aflatun Amashov and Hikmat Mammadov, the chairman of the Central Asian and Southern Caucasian Freedom of Expression Network (CASCFEN), Azer Hasret, the chairman of Journalists' Trade Union of Azerbaijan (JuHI), Mushfig Alasgarli, also called the proposal of the Armenian side groundless.

Following the objections of the Azerbaijani side, the organizers stated that no provision can be included in the final statement without consensus and invited participants to discuss other proposals. This led to the protest of the Armenian delegation and they left the meeting during the discussion of the latest version of the statement.

OSCE Representative on Freedom of the Media Dunja Mijatovic, for her part, said this conference is a platform for discussion of only media-related issues.

Then, the final statement was adopted.