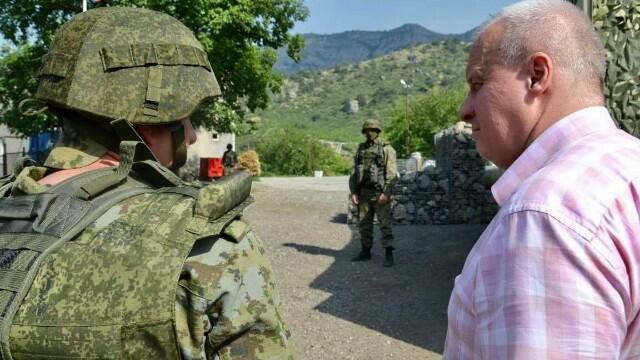 Russian Ambassador to Armenia Sergey Kopyrkin and military and air force attaché of the embassy V. A. Kosov together with the head of the Joint Military Unit of Russia and Armenia T. Porvyan visited Jermukh (Istisu) and Gorus today.

Axar.az reports that the Russian embassy in Armenia has released information about this.

Kopırkin and others met with the officials of the Armenian military command on the ground and got "acquainted" with the situation on the Azerbaijan-Armenia border.

During the visit, Kopyrkin also visited the battalion-tactical group of the 102nd military base located in Gorus and the special aviation group of the Russian peacekeeping contingent located in Garakilsa.

It should be noted that recently Iran is trying to show "economic activity" in Gafan and Gorus, and agreements have been concluded with local governors in this regard. Some experts claim that Iran wants to establish a military presence in the area (Zangazur) and that there are already signs of this.