“The leader of armed group is in serious condition” 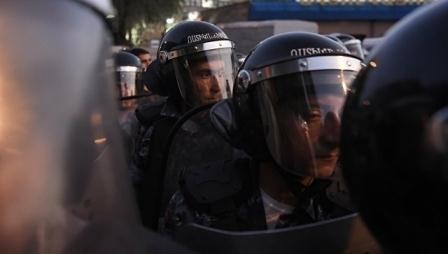 Doctors assess the condition of the leader of the armed group that seized the building of the regiment of patrol-guard service in Yerevan, Pavel Manukyan and his son as serious, said the Executive Director of the medical center “Erebuni” Mikayel Manukyan.

The Director of the medical center reported that the wounded were hospitalized in the morning with gunshot wounds to the legs: “Pavel Manukyan and his son were shot and wounded in the legs, thighs; there is shrapnel damage to the bone. Conducted appropriate operations, fixation of bones”, Manukyan told reporters.

“Everything is out of surgery and in intensive care. Will be carried out all the necessary measures, we are working to improve the condition of patients”, added Manukyan, noting that the operation lasted two hours.

Answering the question whether there is a threat to the life of Pavel and Aram Manukyan, he replied that the threat remains. “The patient is in intensive care, and we assessed his condition as severe, we carry out all necessary actions to reduce the risks”, - said the Executive Director of the hospital.


In turn the chief of Department of resuscitation and intensive therapy of the medical center “Erebuni” Harutyun Manukyan said that Pavel and Aram Manukyan were connected to a respirator. “To make a conclusion about the condition of patients prematurely, we must wait at least 48 hours”, the doctor said.


Two members of an armed group, which has earlier seized the police building in Yerevan, surrendered after a gunfight with police, head of Information and Public Relations of the Police of Armenia Ashot Aharonian said Wednesday.

“Two members of the armed group which seized the police building in Yerevan Gagik Egiazaryan and Aram Akopyan have surrendered to police," Aharonian posted in his official Facebook account adding that there was a gunfight in the building and "as a result [of a gunfight] a police officer and Pavel Manukyan and his son Aram [both members of the armed group] were wounded”.


All three have been transferred to the hospital.


The gunfight is now over and the complete surrender negotiations continue.