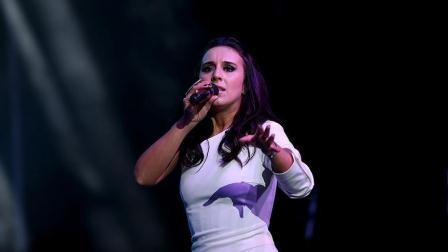 Songs in English, Crimean Tatar and Turkish were performed. The floor was also given to the leader of the Crimean Tatar people Mustafa Dzhemilev:

“I love her [axar edit: Jamala], not only for her magnificent voice, but also for her humanity and patriotism. Jamala did not come to our fatherland in the Crimea due to the occupation. But we will save our home from the annexation, God grant it! The American Ambassador in Ukraine told me that they have been trying to tell the world about this injustice over two years. But Jamala managed to do it in three minutes.

The occupants of course, wanted Jamala to take Russian citizenship when she arrived in Crimea. But she replied: "No! I already have a citizenship. I am a citizen of Ukraine." You know that at the Eurovision Jamal competed with the representatives of 30 countries. But the real struggle was between Russia and the Crimean Tatars. And the Crimean Tatars have won, due to Jamala! And I want to thank not only her, but also her father and mother for such a gift.”

Jamala won the 64th Eurovision Song Contest this year, as a representative of Ukraine with a song about the deportation of Crimean Tatars, called 1944, by gaining 534 points.