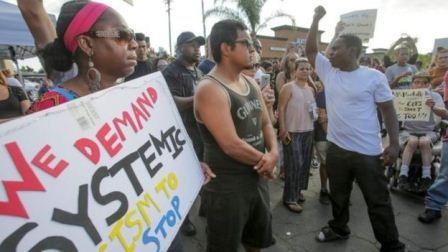 Police in the US city of San Diego have released two videos of the fatal shooting of an unarmed black man outside a shopping centre on Tuesday.

The footage shows two officers confronting Alfred Olango before one of them shoots him dead him in a car park the suburb of El Cajon.

The police said the man had been behaving erratically at the time.

But his mother said he was having a mental breakdown and needed help.

The shooting of Mr Olango, a Ugandan refugee, led to violent protests in El Cajon.

Police said they shot the 38-year-old when he pulled an object that turned out to be an e-cigarette from his pocket and pointed it at a police officer.

One of the videos of the incident was recorded by a surveillance camera mounted at the window of a drive-thru restaurant, while another came from the mobile phone of a bystander.

In the second video, which lasts less than 20 seconds, a woman can be heard shouting: "Officer don't shoot him!" before at least four shots ring out and she screams.