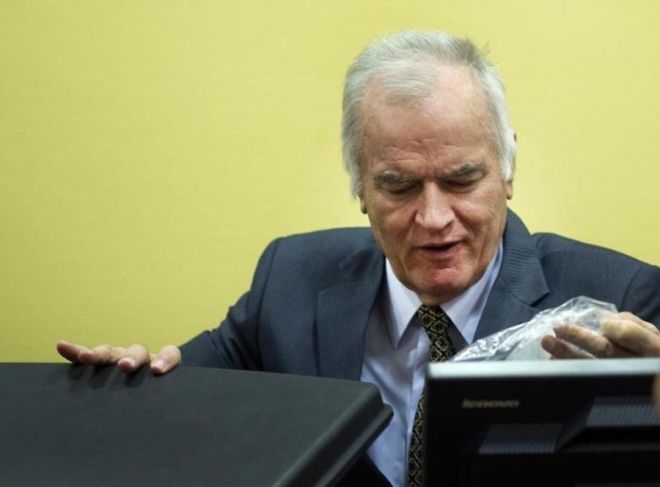 Former Bosnian Serb military commander Ratko Mladic was a central figure in the 1995 massacre of thousands of Muslims from Srebrenica, prosecutors said on Monday in closing arguments in his genocide trial.

Rather than the "marginalized figure" his defense attorney made him out to be, Mladic helped orchestrate the killings, prosecutor Alan Tieger told judges at the International Criminal Tribunal for the Former Yugoslavia (ICTY).

"Mladic walked into Srebrenica and vowed that the time had come to take revenge on the Turks," Tieger said.

On July 11, 1995 Mladic promised to give the city to the Serbian people. In the following days, nearly 8,000 "Srebrenica men and boys, boys as young as 12 years old, had been systematically murdered," he said.

Prosecutors were making their closing arguments in Mladic's trial, the last major war crimes case at the tribunal, which is winding down its work after more than 20 years.

Mladic, 74, faces up to life imprisonment for two counts of genocide and nine counts of crimes against humanity and war crimes. The final hearings run through Dec. 15 and a judgment is likely in 2017.

"If Mladic hadn't come to Srebrenica my son Nermin, whose birthday it is today, would still be alive, all of our families would be alive," Munira Subasic, a member of the Mothers of Srebrenica group, said outside the courtroom.

Mladic was charged alongside former Bosnian Serb political leader Radovan Karadzic, who was sentenced to 40 years in prison in March.

Prosecutors say they masterminded a conspiracy to "ethnically cleanse" large parts of Bosnia of Muslims and Croats and carve out a Serbian state during the violent breakup of federal Yugoslavia in the 1990s.

According to the Karadzic judgment, Mladic shared a goal to "permanently remove Bosnian Muslims and Bosnian Croats from Bosnian-Serb claimed territory".

Tieger quoted Mladic as telling the Bosnian Serb assembly in 1994 they had an historic opportunity to create "not any kind of state, but an all Serbian state with as few enemies as possible".

Karadzic and Mladic were indicted shortly before the end of Bosnia's war, which claimed up to 100,000 lives, but spent more than a decade on the run in Serbia before their arrest.

When Mladic was caught in 2011 he was in poor health after a series of strokes, but the court found he was fit to stand trial.

Established in 1993, the tribunal indicted 161 individuals from all sides of the conflict and 83 have been convicted.