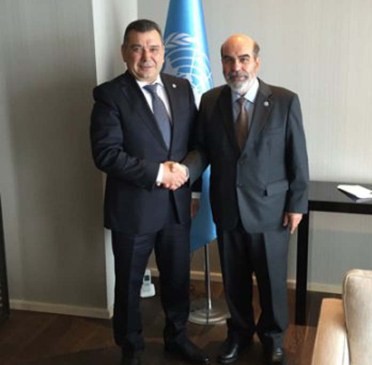 Azerbaijan's successful experience in the sphere of agriculture should be used in other countries in order to reach the Sustainable Development Goals in the region, Jose Graziano da Silva, director general of the Food and Agriculture Organization of the UN (FAO) said.

He made the remarks during a meeting with Azerbaijan's Deputy Minister of Agriculture Ilham Guliyev, said the country's Ministry of Agriculture.

The meeting was held during Guliyev's visit to Antalya to take part in the 30th session of the FAO Regional Conference for Europe.

Jose Graziano da Silva believes that the opening of FAO's coordination office in Azerbaijan and the creation of the partnership program is the beginning of a new stage of cooperation between FAO and Azerbaijan.

He praised the role of Azerbaijani government, in particular, the Ministry of Agriculture in this sphere.

Guliyev, for his part, talked about the success achieved in ensuring the food safety and in agricultural sphere in general, the increasing state support to farmers, the positive results of the reforms carried out in the country.