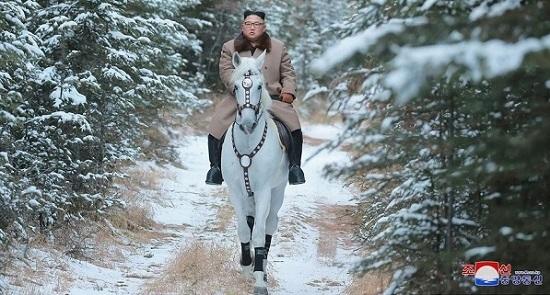 North Korean leader Kim Jong Un vowed to surmount US-led sanctions on his country in state media reports Wednesday alongside evocative propaganda images of him riding a white horse seen as foretelling significant decisions before his own deadline for US movement on nuclear talks expires.

Axar.az reports citing The DailyStar that the images in his country’s official media showed Kim riding a white horse to climb a snow-covered Mount Paektu, the location and the animal both symbols associated with the Kim family’s dynastic rule. The highest point on the Korean Peninsula is sacred to North Koreans and Kim has visited it before making previous major decisions such as the 2013 execution of his powerful uncle and his 2018 entrance into diplomacy with Seoul and Washington.

The images and Kim’s comments were released days after his country’s first nuclear negotiations with the US in more than seven months fell apart.

The white horse is also a propaganda symbol for the Kim family that has ruled North Korea for seven decades with a strong personality cult surrounding family members. State media have occasionally shown Kim, his sister and his father riding white horses. The symbolism goes back to Kim Il Sung, who according to the North’s official narrative, rode a white horse while fighting against Japanese colonial rulers.