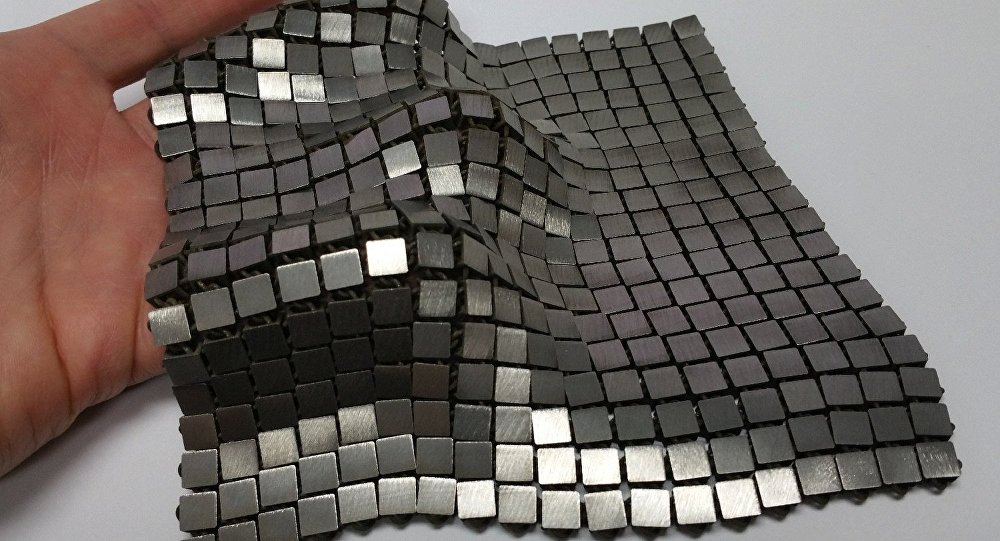 Space suits are among the most cutting-edge garments in existence, boasting features light years ahead of standard apparel. Nonetheless, NASA is taking inspiration from medieval attire in developing a new type of material for use in space clothing – chainmail – that will provide protection not just for astronauts, but spacecraft and other devices.

The armor is the pioneering work of NASA Jet Propulsion Laboratory (JPL) Systems Engineer Polit Casillas, the son of a Spanish fashion designer. Inspired by traditional textiles, the "space fabric" relies on advances in 3D printing to create woven metal fabrics capable of folding and changing shape quickly. Much like textiles are typically produced by weaving together innumerable threads, the "space fabric" relies on 3D printing to create metal squares in one piece, which are subsequently strung together to form a coat of armor.

"Space fabric" has four essential functions – reflectivity, passive heat management, foldability, and tensile strength. With one side reflecting and the other absorbing light, the material effectively acts as a means of thermal control. It can also fold in many different ways and adapt to shapes, all the while maintaining tensile strength.

On top of protecting astronauts from the elements in space and on other planets, the material could shield spacecraft and devices such as antennas from meteorites and other intergalactic hazards.

With NASA planning to explore Jupiter’s moon Europa (a potential candidate for alien life) in the next decade, the material could be key for getting the craft there, and shielding explorers. It could potentially revolutionize the way spacecraft and space systems are created – rather than being assembled from many individual parts, they could be printed in their entirety. Moreover, the fabric could be used to build habitats on new planets with unforgiving and unpredictable terrains.

The fabric is considerably cheaper to produce than traditionally fabricated materials. Designing and building spacecraft is normally a vastly complex and costly process, but via the addition of multiple functions to a material at different stages of development, the whole process can be made cheaper and new designs implemented.

Andrew Shapiro-Scharlotta is a manager at the JPL's office responsible for funding early-stage technologies like the space fabric. This production process could enable all manner of designs and new mission concepts – NASA's Space Technology Office is said to be just scratching the surface of what’s possible.

3D printing has been developed for use aboard the International Space Station, and Casillas' team likewise wishes to ensure the fabric can be manufactured in space.

In future, they envision a process whereby tools and structural materials can be printed from recycled materials, offering additional cost-savings and enabling rapid, on-demand production of necessary components.