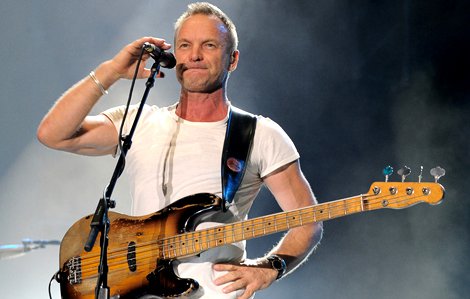 How much is a rock star’s Manhattan condo worth after nine years of ownership? For Sting, the answer is more than double its original price.

The former lead singer for the Police and his wife, actress and producer Trudie Styler, just listed their duplex penthouse at 15 Central Park West for $56 million, more than twice its $27 million purchase price in 2008. The floor plan of the 5,417-square-foot (503-square-meter) apartment was custom-designed for the musician, who bought it while the building was still under construction, according to property listings and public records.

The three-bedroom unit, on the 16th and 17th floors, features 10-foot (3-meter) ceilings, a 396-square-foot “entertaining terrace” and a catering kitchen with two refrigerators, four ovens and three dishwashers, according to the listing by Corcoran Group agent Deborah Kern, who is marketing the apartment with Suzun J. Bennet of Sotheby’s International Realty.

“A semi-private landing leads into the residence, where you are immediately taken in by the breathtaking view,” according to the listing.

The dual limestone towers at 15 Central Park West, completed by Zeckendorf Development in 2007, set a standard for Manhattan’s ultra-luxury condo market. Some resellers at the property along Central Park have doubled their initial investments, even as the supply of high-end homes in Midtown proliferates. In January, a 3,000-square-foot condo sold for $27.5 million -- $2 million less than it was listed for, but more than double its $12.2 purchase price in 2008, according to StreetEasy. That same month, a two-bedroom apartment on the 30th floor that was bought in 2008 for $5.9 million sold for $17.7 million.

The best-known deal at the tower involved former Citigroup Inc. Chairman Sandy Weill, who sold his penthouse in 2012 for $88 million, Manhattan’s most expensive residential real estate transaction at the time. Weill paid $43.7 million for the condo five years earlier.

The complex, designed by Robert A.M. Stern, includes a 14,000-square-foot fitness center, a 75-foot pool and a private restaurant for use by residents.

Sting signed a contract to buy his apartment as early as 2006, using his given name Gordon Sumner, according to public records.