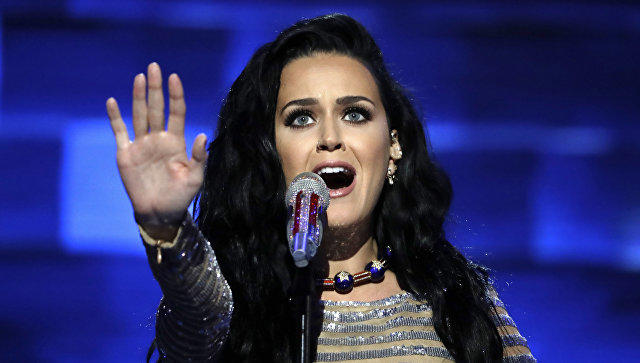 The 32-year-old - who live streamed her life round-the-clock over the weekend to promote her new album Witness - oozed sex appeal in the skintight get-up, which featured a plunging purple crop top and very tight matching leggings.

Axar.az reports citing Express, the California Girls hitmaker’s bottoms definitely highlighted her ridiculously toned pins and left little to the imagination, with them being pulled up just over her belly button to give onlookers a glimpse of her washboard abs.

Katy’s low-cut top half also showcased her ample assets, with her looking as stunning as ever as she welcomed her voice coach over to gear up for her final concert as part of the album extravaganza.

The beauty previously flashed her bare bottom on camera the day before as she stripped naked for a relaxing massage.

Katy - who moved into an apartment fitted with 42 cameras for the event - appeared to be oblivious to the fact that she was being watched so intently, with her gazing up towards the ceiling and bending one leg to flash her toned pins.

The singer’s latest appearance comes after she spoke out about “creating a character called Katy Perry as a form of protection”.

She explained: “A lot of people are living in fear from something that happened in their childhood, or some form of PTSD they picked up along the way, and I created this wonderful character called Katy Perry that I very much am, and can step into all the time, but I created that character out of protection.

“I was scared that if you saw me, Katheryn Hudson, the girl wearing the Bioré strip on my nose, you’d be like, ‘that’s not glamorous’. It was me going, ‘OK, I’ve been upset my whole childhood so I’m going to show the world I am something, that I am going to do something and that I am enough’.

“I didn’t want to be Katheryn Hudson. I hated that, it was too scary for me, so I decided to be someone else,” Katy added to The Guardian.